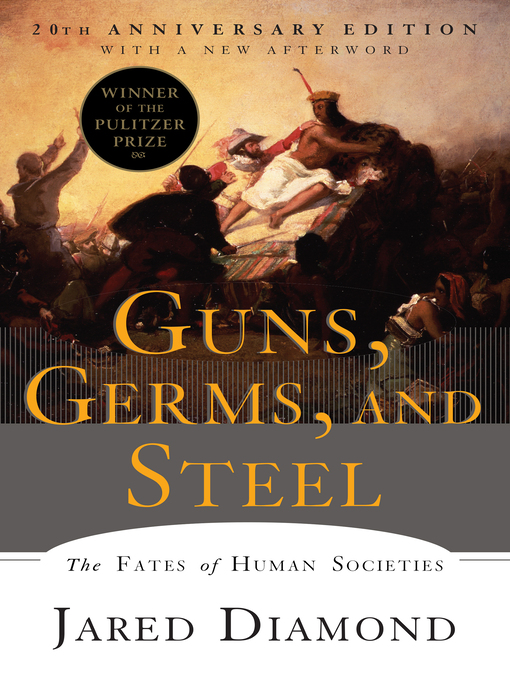 "Fascinating.... Lays a foundation for understanding human history."—Bill Gates In this "artful, informative, and delightful" (William H. McNeill, New York Review of Books) book, Jared Diamond convincingly argues that geographical and environmental factors shaped the modern world. Societies that had had a head start in food production advanced beyond the hunter-gatherer stage, and then developed religion —as well as nasty germs and potent weapons of war —and adventured on sea and land to conquer and decimate preliterate cultures. A major advance in our understanding of human societies, Guns, Germs, and Steel chronicles the way that the modern world came to be and stunningly dismantles racially based theories of human history. Winner of the Pulitzer Prize, the Phi Beta Kappa Award in Science, the Rhone-Poulenc Prize, and the Commonwealth club of California's Gold Medal.
Publisher: [S.I.] : W. W. Norton & Company, 2017.
ISBN: 9780393609295
Additional Contributors: Overdrive Inc

Harari read this and it influenced him.

I read this a number of years ago and found in it a new genre of literature.

Great examination of how factors other than racial differences account for what peoples became those that developed the capacity and desire and conquer and colonize. He goes in depth into many regions and subjects, but the thesis is common throughout. If you're most interested in a thing or two (ie why China's early tech advantage didn't lead it to worldwide domination or how animal domestication played into society), you can skip ahead to those sections.

The thesis, well-known at this point, is that it is not inherent biological or "racial" differences that account for variations in success during certain points in history, but rather the geography and climate peoples started out in. The better the conditions, the earlier the development of food production, which then leads to a population growth and more "developed" government institutions and innovations such as writing and military technology. The darker part of the thesis is that early exposure to animals leads to both the evolution of hybridized animal-human diseases (chicken pox, the bubonic plague, smallpox, etc.) and immunity to them. As Diamond notes, this is the deadliest weapon "civilizations" have in their arsenal against peoples not as far along on the food production/complex government path, as shown by the conquests of both the indigenous peoples of the Americas and Australia.

Although Diamond is careful not to pass judgment or pull at heartstrings (which may be warranted in many instances), he does note that the pivotal moment in the long race for development was the extinction of many of the large mammals in Australia and the Americas. Had those animals survived and been domesticatable, the fate of the Americas in particular might have gone the other way. However, Eurasia was the continent with the most geogrpahic advantages, the most significant being the east-west axis, which goes hand in hand with similar latitudes throughout the continent. Similar latitudes, in turn, make it easier to pass crops from one end of the continent to another. That Africa and the Americas are dominated by a north-south latitude means that it is difficult to pass crops froms one end of the continents to the other.

Towards the end, Diamond is careful to point out that while geography gives a head start, it is not a guarantee, and political considerations must be taken into account when trying to determine which country- or even business- will win. Throughout the book, Diamond mentions in several places that although the Americas and other regions hadn't achieved certain milestones by the time they met with the Eurasians, that didn't mean that they weren't going to if left alone. He also notes that in the indigenous cultures he's worked closely with, he's met some brilliant inventors.

I thought the thesis was inherently not racist, and I'm not getting- at all- some reviewers complaints about that. In fact, at the beginning, Diamond points out reasons why the average member of the indigenous population of New Guinea is arguably more inherently intelligent than the average member of a given Western civilization: because New Guineans have a longer history of hunter-gathering, the primary killer among them is murder. Evading such a death requires more intelligence than evading death by infectious disease, which is more likely to fell a Westerner. Also, because hunting and gathering for food requires more skill and knowledge than going to a supermarket for food, survival doubly demands intelligence. Finally, most New Guineans lack the distractions Americans, Europeans and many upwardly mobile Asian countries have (television, internet, etc.) which have been shown to impede intellectual development, particularly in young children. Diamond makes that point not to prove the intellectual superiority of a certain country or "race", but to show that ultimately, it doesn't matter; no one would argue that the New Guinean legacy has been more successful through the world than the Eurasian.

Saw the TV show. Academically political in dismissing successful groups esp Europeans and besmirching them too eagerly. Some tribes got opportunities, but also had innate analytical and social traits that helped exploit resources. The most effective traits then had to spread in those tribes. Read about Taoist 5 Elements and Blood Type personalities for much deeper insights into innate human traits and how they form personalities of different individuals and races.

A fascinating examination of the forces that have shaped human history. Why did the Fertile Crescent lead the world in the early development of farming? Why did European peoples come to dominate the Americas so easily? Diamond examines the impact things such as native plant and animal populations had on the development of mankind on each of the continents. Readable, and easily accessible for the amateur historian.

I read it for college many years ago. It's a very ambitious topic to take on and Jared Diamond lays out a convincing argument. I really liked reading about the different civilizations and their history. It does get a bit repetitive at times, but I do think that's necessary to drive home the point. It's a great read though.

"StarGladiator's" comments are exactly right, and much kinder than my assessment. This book is cover to cover crap! It follows the theory that if you bury readers in enough verbiage they won't notice that there's no there, there. My former respect for the Pulitzer Prize is now gone. This book (and a few other Pulitzer choices) has made me aware that the Pulitzer prize lacks integrity, and is not based on merit, quality, or scholarship. To my dismay, the Pulitzer committee, apparently, has an agenda.

I gave this book 3.5 stars, but I'm sure I would've given it a higher rating if I was just a few years older :) Guns, Germs, and Steel is a 500 page long World History and Social Studies course with a worldly and witty, if slightly repetitive teacher. An essential read for anyone who wants to educate themselves or impress a teacher.

Excellent summary of mankinds progress through the various ages.

smplreader thinks this title is suitable for 8 years and over

mbazal thinks this title is suitable for 13 years and over

suby99 thinks this title is suitable for All Ages

“In short, Europe’s colonization of Africa had nothing to do with differences between European and African peoples themselves, as white racists assume. Rather, it was due to accidents of geography and biogeography—in particular, to the continents’ different areas, axes, and suites of wild plant and animal species. That is, the different historical trajectories of Africa and Europe stem ultimately from differences in real estate.”

Guns, Germs, and Steel: The Fates of Human Societies is a 1997 book by Jared Diamond, professor of geography and physiology at the University of California, Los Angeles (UCLA). In 1998 it won a Pulitzer Prize and the Aventis Prize for Best Science Book. A documentary based on the book, and produced by the National Geographic Society, was broadcast on PBS in July 2005.[1]

It was also published under the title Guns, Germs and Steel: A short history of everybody for the last 13,000 years.[2] The book attempts to explain why Eurasian civilizations (in which he includes North Africa) have survived and conquered others, while refuting the assumption that Eurasian hegemony is due to any form of Eurasian intellectual, moral or inherent genetic superiority. Diamond argues that the gaps in power and technology between human societies originate in environmental differences, which are amplified by various positive feedback loops. When cultural or genetic differences have favored Eurasians (for example, written language or the development among Eurasians of resistance to endemic diseases), he asserts that these advantages occurred because of the influence of geography on societies and cultures, and were not inherent in the Eurasian genomes.

There are no notices for this title yet.

Find it at JCLS